Our first, quite short season just ended yesterday – the magazine in the Asasif is sealed and closed again, some of the team members are already back in Vienna and Munich, three of us arrived this afternoon in Cairo and will leave in the next days.

Altogether, the first season was very successful and all goals were achieved. The focus was on documenting coffins and other objects from the long use-life of TT 414. More than 80 drawings were produced by Patrizia and Mona, comprising small finds (mostly Ptolemaic faience shabtis with texts bearing the names of their owners), wooden objects including a beautiful Ptolemaic Ptah-Sokar-Osiris statue and pottery (complete pottery vessels and fragments, mostly Ptolemaic from the re-use of TT414, but also some Saite vessels from the original phase of use). 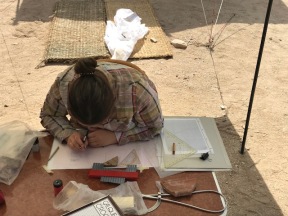 In addition to these drawing, 360 objects were photographed in very high resolution with a full-frame camera by Cajetan. These objects were primarily coffin fragments, fragments of wooden shrines and boxes and again shabtis. With these new photos suitable for publication, most of the objects are now fully documented. 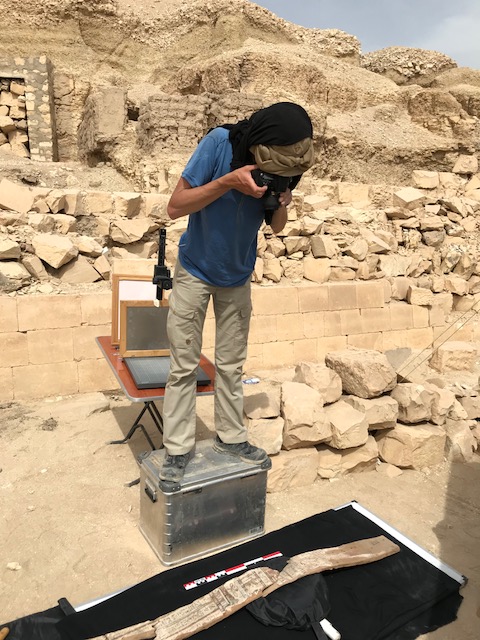 The conservation work was successfully started thanks to cooperation with the Austrian Archaeological Institute.  Daniel Oberndorfer joined the project in the field and managed to get a first general overview of the material, its needs and specifications to develop a program for cleaning and consolidation. Conservation work focused during the 2018 season on wooden objects, especially on coffins and fragments of shrines and wooden statuettes (Ptah-Sokar-Osiris figures). It mainly comprised of consolidation and mechanical cleaning.

A total of 23 wooden and painted objects were successfully cleaned, consolidated and photographed. Drawings of some selected pieces are planned for the next season. With the data and experience from the 2018, a larger-scale conservation programme can be designed for the next years, considering the individual properties of the material from TT 414. Conservation work will be the main focus of the upcoming seasons.

Related to this, I managed to reorganize the magazine according to priorities. The majority of the material still to be studied is the large amount of coffins – more than 180 coffins within the magazine are currently entered in our database, several dozen are still missing. 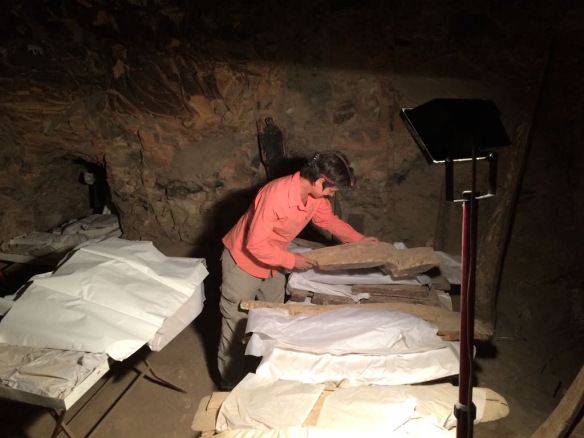 Besides sorting the material regarding their state of preservation and thus the need of consolidation as well as of scientific importance (datable pieces, pieces of well-known persons buried in TT 414 etc.), the focus of this working tasks of the 2018 season was to find matches between the fragments preliminary registered under “K-numbers”. This proved very time consuming, but also quite successful – 16 new matches to registered coffins from the “K-numbers” were achieved. Furthermore, four newly identified registered coffin fragments can be noted and five additional parts to fragmented coffins were documented.

The importance of this search for joints, which will continue in the next season, can be illustrated by the examples of a new fragment of coffin of the daughter of Ankh-Hor and a newly identified black-and-yellow style Ptolemaic coffin as the outer coffin of a singer with the name Ta-net-Geb. More new names were noted on various fragments and still have to be added to our genealogical data and processed in detail.

The rich prospective of the detailed work on the complete set of finds from TT 414 became very clear during the 2018 season. But, in order to achieve major results and to support preliminary ideas with further evidence, work must continue in the near future and is planned for a next season in spring 2019. Large amounts of coffins, fragments of coffins and cartonage from the Late Period to Ptolemaic and Roman times still remain to be cleaned, consolidated and restored – and will for sure bring to light more new information about the use of the tomb of Ankh-Hor throughout the ages.

My deep thanks go to all team members for their enthusiasm for the project and making 2018 a great season! The photo gallery gives some impressions of all the various tasks achieved and also of how much fun we had working on this really interesting set of diverse objects. Of course, work would not have been possible without the support of the Egyptian authorities and especially of the local inspectorate on the West Bank; I am very grateful to a number of people, first of all to our inspector Zeinab Mohammed Elsayed for enabling us to work according to the working programme.

Looking already much forward to come back to Asasif next year! Updates about our processing of the data collected in 2018 will of course follow.