By today, all presentations of our Study Day are now available as videos on LMU cast – for free of course.

I am especially happy that despite of the technical problems on October 12, we can now introduce the presentation by Veronica Hinterhuber about “The Theban cultic landscape in the Late Period”. This lecture makes it very clear, how much attention we always have to pay to the embeddedness of a necropolis into the general sacred landscape. And in Late Period Thebes, this is very evident.

Hassan Ramadan Aglan nicely points out the potential of 3D models of Egyptian tombs – taking the tomb of Ankh-Hor as a case study, but also showing some examples from the tombs he studied for his PhD, located at Dra Abu el-Naga.

I hope these free videos are as well perceived as the Study Day!

Many thanks again to all presenters and also to all participants!

The first study day of the LMU Ankh-Hor Project was successfully held online using Zoom last week. We were very proud and happy that more than 120 colleagues and friends from several countries in Europe, from Egypt and even from the US were joining us! Many thanks, this wide interest is much appreciated and means a lot to us.

Although there were of course some technical problems – no surprise – all participants remained patient with us and our programme highlighted the challenges, achievements and problems connected with the study of TT 414.

I received much positive feedback and also a number of very useful comments and advice – again many thanks for this! Besides the scientific benefits, it was also just very pleasant to see so many colleagues and friends one hardly sees in person in these challenging times!

As promised, all presentations will be accessible as videos on LMU cast – for free of course. For now, the lectures by Cajetan and Patrizia are already available, more will follow soon.

Cajetan spoke about technical aspects and logistics connected with photography of objects from TT 414. He also gave some comparisons with different set-ups in Sudan as we experienced in the framework of the AcrossBorders project.

Patrizia highlighted our technical equipment, both hard- and software, for archaeological drawings from a large set of different objects from the tomb of Ankh-Hor. She also introduced our latest purchase in terms of graphics tablets.

An upate with more videos will follow shortly! And for sure this was not the last study day of the LMU Ankh-Hor project.

I am very proud to announce the first study day of the LMU Ankh-Hor Project which will run online using Zoom on October 12 2020. This online format has many advantages – participation is free and we hope to reach many people worldwide interested in Theban archaeology, the Late Period and Ptolemaic times and funerary customs. Participants may also attend just individual time slots – just have a look at the preliminary programme. Please note that registration is mandatory via: https://eveeno.com/109463542

The main aim of the study day is to introduce the lines of research currently carried out by the LMU project working on TT 414 in the Asasif, high lightening the potential of this monumental Late Period tomb for our general understanding of the Theban necropolis.

I am especially delighted that the excavator of TT 414, Manfred Bietak, will present in a key lecture the discovery of the tomb in the 1970s – an exciting excursion back in time!

Research on TT 414 continues to bring interesting and highly relevant findings to light – we very much hope that despite of covid-19, we will soon be able to work again in the Asasif. Join us all on October 12 for a virtual tour through one of the intriguing monumental tombs of the Saite period in western Thebes with a complex life history!

The last days and week have been very hot here in Munich – of course not as hot as in Luxor and Egypt, but enough for a real summer feeling.

Since I was originally scheduled to arrive in Egypt this weekend, this is at least some comfort. Due to the current covid-19 situation, our 2020 season working on the tomb of Ankh-Hor had to be cancelled and we very much hope we will be able to return to Asasif in 2021.

Since I am missing the daily view of the splendid Theban necropolis, I just thought I make a very short video. These 6 minutes illustrate the main work tasks and the main aims of the Ankh-Hor Project.

I hope you enjoy it and let’s all keep our fingers crossed that the virus will soon be under control – worldwide and of course in Egypt. Wishing all of you a very nice summer and please stay safe!

While the world and also Luxor with the Asasif necropolis all hold their breath because of the covid-19 crisis, a new issue of the journal Egypt & the Levant has been published in Vienna. I am proud that this volume also includes an update on the Ankh-Hor project (Budka 2019).

There are still plenty of information to unveil from the tomb of Ankh-Hor.

In this article, the most important results from the 2018 and 2019 seasons are summarised and future work is outlined, especially regarding the large corpus of coffins from TT 414. The focus is here on the numerous Ptolemaic coffins and the information they hold for patterns of re-use, but also for religious, cultic and iconographic aspects of Late Egyptian funerary tradition in Thebes.

Our permissions for the next season in the Asasif in fall 2020 were already granted – so let’s hope that we can also actually continue our consolidation and documentation work on the important finds from the tomb of Ankh-Hor. For now, of course the only priority is to stay safe and to stay home – the crisis will be over some day and we all have to stay patient!

Wow, it has been a very intense and very stimulating week at the International Congress of Egyptologists last week in Cairo. Besides stunning settings for dinners at Manial Palace and the Citadelle, there was much food for thought in the lecture halls. Especially intriguing were presentations of new results from the Theban necropolis and beyond – there is so much current fieldwork in Egypt that one week can barely cover all of these missions and projects!

I myself presented the LMU Ankh-Hor Project at the ICE.

I talked about some new data which allow an update on the use-life of TT 414, the 26th Dynasty tomb of Ankh-Hor. The important aspect here is that I believe it can be used as a model for other temple tombs in the Asasif. I also summarized the history of research of TT 414 and stressed the important aspect of joining data from museums and collections and the Austrian excavations in order to reconstruct the actual tomb groups from TT 414. 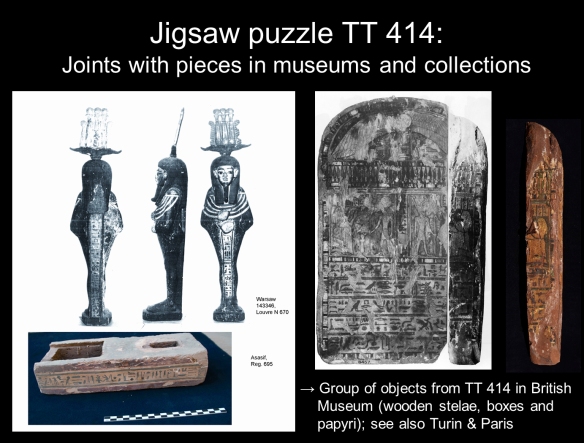 Looking already now much forward to the next ICE, this time in Leiden!

Time flies by – on such a rainy day like today in Munich, summer really seems to be over… My recent study season in Luxor was very successful and despite of the high temperatures really productive. 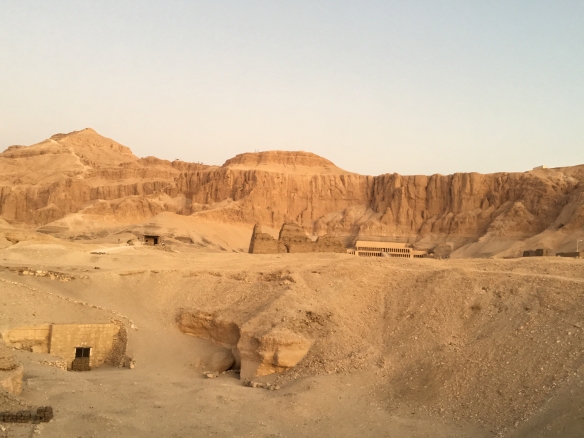 The necropolis of Asasif on an early August morning.

The South Asasif Conservation Project directed by Elena Pischikova had made fantastic discoveries this season and the corresponding ceramics were exciting to process. Of course I was especially looking for parallels for TT 414, the tomb of Ankh-Hor. This season, not only nice comparisons from the second heyday of the Asasif during the 4th and 3rd centuries BC showed up, but also intriguing pieces from a little understood period, the late 26th Dynasty and the 27th Dynasty. Especially the latter are important because, as clearly stated by Wolfram Grajetzki already some years ago: „The period of the first Persian domination remains something of a mystery for archaeology in Egypt. There are very few monuments and even fewer tombs that can be securely dated to this time“ (Grajetzki 2003, 117). Especially within Thebes, burials attributable to the Persian Period (27th Dynasty) still remain an enigma and are difficult to date (see Aston 1999), but ceramics from both Southern and Northern Asasif clearly attest to the funerary activities during that time. Much more research is required here!

For now, some post-excavation work is necessary for the 2019 South Asasif season and I am busy with entering data into the database. Next week, Vienna is calling and the focus will be more on Sudan and the MUAFS project. All in all, this summer was not only hot in terms of temperatures, but also extremely interesting and inspiring for my projects in Asasif and beyond.

Here in Munich, the summer seems to be coming to an end – at least in terms of weather and temperatures. It has been quite cool during the last days and it’s just about time to go to Egypt for more sun and heat ;-)!

I am therefore delighted that later this week, I will be travelling to Luxor – to join the South Asasif Conservation Project directed by Elena Pischikova for a short 2-weeks-study season of pottery. I’ve been studying the ceramics from the two fantastic, monumental Kushite tombs of Karakhamun and Karabasken, TT 223 and TT 391, in South Asasif since 2011. This season, my focus will be on new material from the tomb of Karabasken and I am very much looking forward to this. Besides the important material dating to the original use of the tomb, the 25th Dynasty, there is plenty of ceramics from later phases attesting to the re-use of the structure from the 26th Dynasty up to Coptic, Islamic and even modern times.

A large amount of the pottery from both TT 391 and TT 223 is datable to the 30th Dynasty and the Ptolemaic Period – and thus of much interest for my study of TT 414, the tomb of Ankh-Hor.

Nicely comparable pottery corpora from the re-use of Theban temple tombs: TT 414 to the left, TT 223 to the right.

The ceramics from South Asasif I am going to be working on in the next weeks provide perfect parallels for our material from the burial monument of Ankh-Hor in northern Asasif and illustrate the heyday of re-using monumental Theban Late Period tombs during the 4th and 3rd centuries BC.

Good news within the summer break: Our study of neglected finds from the tomb of Ankh-Hor in Asasif, TT414, in Egypt is highlighted in the latest issue of the The Project Repository Journal (July 2019, pp. 42-43).

Our aimed reconstruction of the complete use life of the tomb from the 6th century BC until Roman and Coptic times will provide new information about the people buried in TT 414 and also allows high lightening important new aspects of Egyptian funerary customs throughout the ages.

TT 414 has a huge potential to serve as a case study to analyse various attitudes of later generations towards the original owners of monumental Theban burial places – this can be best illustrated by the recycling of coffins. For the understanding of the complete, very complex use life of TT 414 a more in depth study is therefore much needed and will be carried out in the next years. At present, large amounts of coffins, fragments of coffins and cartonnage from TT 414, dating from the Late Period to Ptolemaic and Roman times, still remain to be cleaned, consolidated and fully documented. These tasks require time and financial support, but will definitly contribute to writing a new chapter of Theban funerary archaeology.

The rich potential of the thousands of finds from TT 414, the tomb of Ankh-Hor, for understanding the funerary culture of Late Period and Ptolemaic Thebes as well as family relations and more was recently the focus of an interview I gave to the Austrian Academy of Sciences. 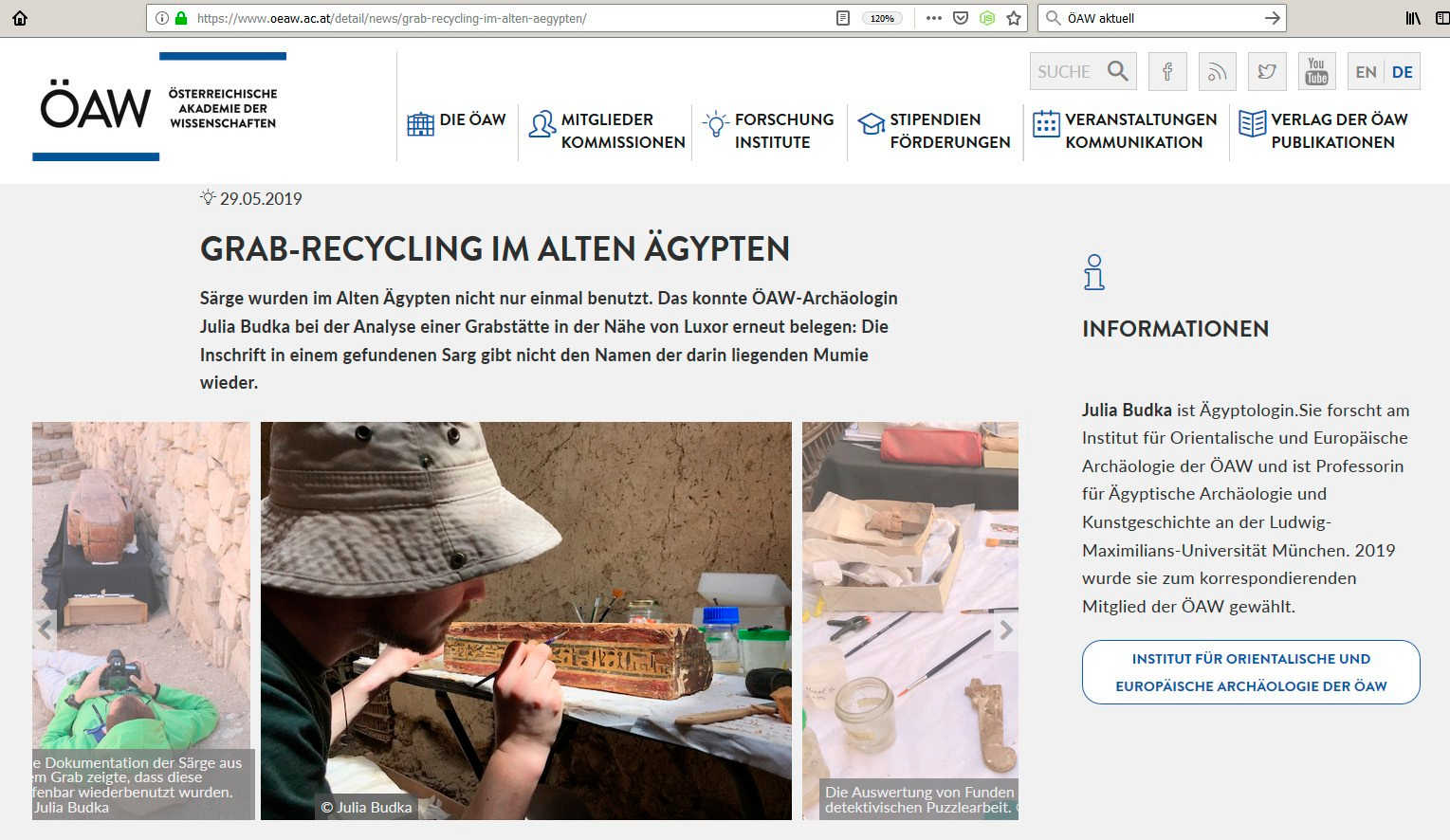 The interview was published yesterday in German – more media coverage of the project which makes me very proud. Besides the interesting re-use of coffins I also mentioned the fascination history of the use and re-use of the “Lichthof” in TT 414. A blog post about this aspect of the tomb of Ankh-Hor will follow shortly.